This post has been sitting in my drafts folder for more than a year. R didn’t want me to post it, but considering (1) I no longer give a shit and (2) I’m attending my very first Blathering, I need to get this little blog up and running again. I’ve been explaining what I did for this party to people for years, so this post seemed to be pretty perfect to get back in to it. I’ll try to contain my snarky digs at R and his folks (who hated the party, btw) (ok, that will be my only dig, promise) (but seriously. They HATED this idea)

R turned 30 and I wanted to do something big for him. I knew that I wanted to throw a surprise party, and I wanted there to be a theme. I tried to think of themes to include his favorites: Muppets, Star Wars, Lord of the Rings, Video Games, Robots – and they all came out looking with varying degrees of success. I didn’t want it to look like a child’s party – He is an adult turning THIRTY. But I did want it to be fun, a little punny, and include all of his interests. And then it hit me – NERDY THIRTY 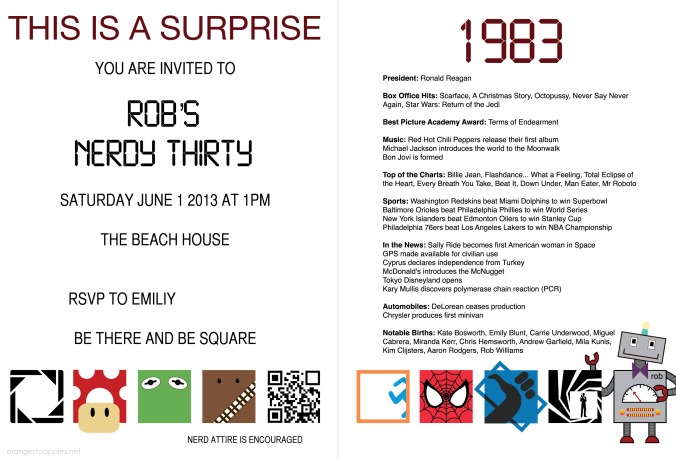 I had a lot of fun putting together the themed menu, and it was basically a big hit. Some of the references were lost on most of the guests, but that was OK. R got everything, with the exception of the Legend of Zelda reference, because I didn’t realize he had never played the game before (UNACCEPTABLE!)

Anyway, here’s the food table, referred to as Admiral snAckbar:

Lord of the Rings: 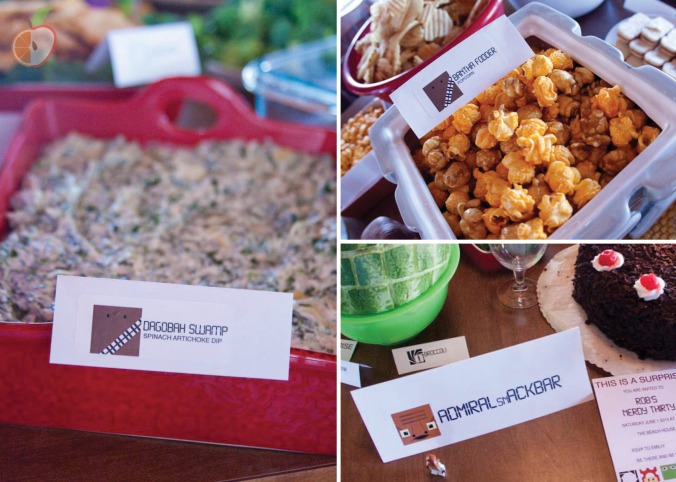 This one was a bit of a stretch. One of R’s favorite snacks is Triscuit with sliced cheeses. The tagline on the invitations was “Be Square” so I kindof used that as the them for the Triscuit. As I mentioned before, R didn’t get the Zelda/Lon Lon Ranch reference. But not all references can be perfect. Same with the broccoli as a reference to James Bond. We had just finished watching every James Bond movie, so I wanted to include 007 in the party somehow. Bonus points if you get it without clicking this link. 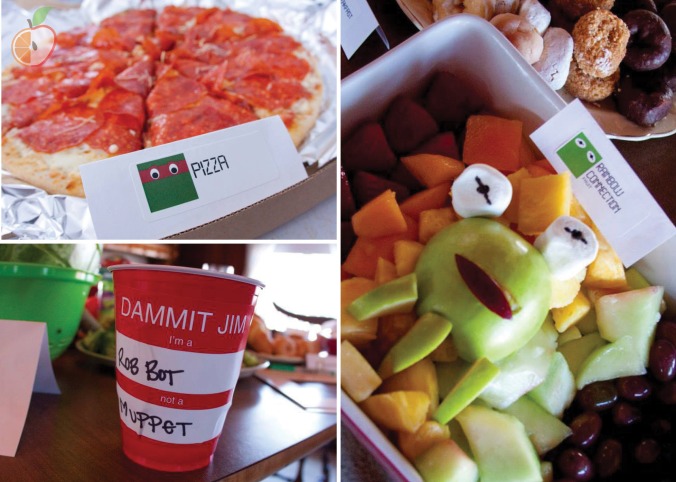 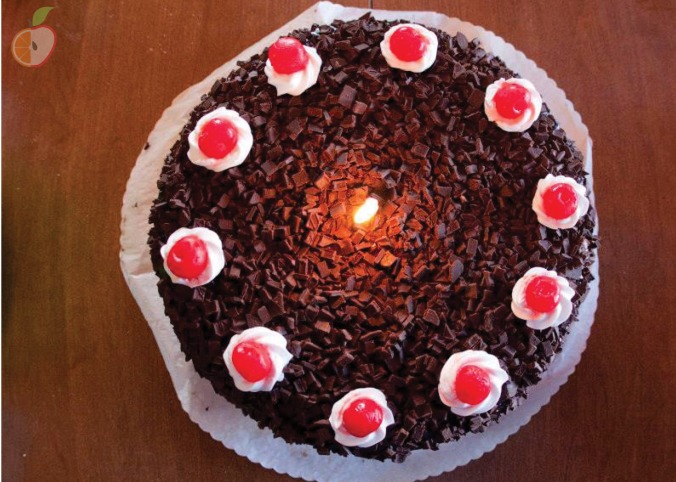 It was NOT a lie, and it was delicious.

And of course, the star of the show: The Death Star Watermelon

We told R that you can’t have a Death Star without destroying it using The Force. His response was “Well, clearly this is the first Death Star, and there isn’t an exhaust port” so we handed him a blindfold and a baseball bat and told him to improvise.

Lastly, I found a company that lets you design your very own robot, so I made the little guy on the invitations:

In honor of Disneyland’s birthday today, I thought I’d share something I wrote back when I worked there.

It was the summer of 2005: Disneyland’s golden anniversary, and, though I didn’t know it at the time, my last summer working at the Park. Our Operations Manager challenged the Fantasyland Attraction Leaders (or, “Leads” in Disney-speak) to find one guest over the summer and make their trip memorable. We were given vouchers for food and merchandise; money wasn’t an object. The only rule was we were to find one guest – only one guest – and go above and beyond for them (meaning, this wasn’t to be an everyday thing).

In August, we were asked to report back with what we did for the guest, and what their reaction was. Below is the email I sent to my manager. This was then shared with the team, forwarded around the resort, and eventually made its way to Florida. The VP of Disney Parks wrote me a personal letter thanking me for what I did. The weird thing is, I don’t feel like I did anything special, because Josh changed us.

Disneyland truly is a magical place. In the seven years I worked there, my fellow Cast Members turned in to a family and guests turned into friends. I kept in touch with Josh’s family after I left Disney, and visited them in Maryland a few years ago. Sadly, Tony (Josh’s father) passed away last year, but he left a lasting impression on my heart. This is my most favorite memory of working for the parks, and a big reminder why I stayed with the company for so many years. Hope you enjoy.

Every now and then you meet someone that touches your heart. Rarely does this occur at the place you work. However, I am fortunate enough to work somewhere that magic is a daily occurrence. Every day, a child meets his favorite character, someone flies over Neverland, and an adult lives the dreams of their childhood. Magic isn’t just something that happens here, its what we are famous for!

In what seemed like a never-ending summer where we were all hot, tired and slightly over-worked, my cast had lost a little bit of their own magic. Working together everyday for the last year and a half, we had become a family, and like families, we had our problems. We had daily disagreements and disputes, and many of us had grown apart. Then Josh came.

I met Josh 2 years ago, but my team had met Josh just last year. He came every day for 21 days straight, and he always sat in the front row, right on the aisle, to watch the Snow White Musical. At first, he was just that kid with the Guest Assistance Card but to some of us he became more. As we chatted with his parents before the show we learned a little more about him.

Josh was Autistic, so dealing with theme park crowds was an overwhelming panic to him. He learned to speak from watching Disney cartoons, and rarely spoke to anyone outside of his immediate family. He considered Disneyland his true home, although he seldom rode the attractions. He planned his day around the Snow White show.

At first, Josh never acknowledged us, but by the end of his trip, he was laughing with our cast members, and would walk up to you and say nothing more than I like you, before walking away. Josh had started to grow on us, but just as we were starting to break the ice, he was back on a plane to Maryland.

As the year went on, things like school, family, holiday seasons and vacations nearly erased Josh from our memory. As the summer season started and July 17th quickly approached, our minds were completely focused on our Golden Anniversary. Everyone’s hectic schedules pushed the limits of our Fantasyland Theatre family, and when the decision was made to cancel the Snow White show, cast morale hit an all time low.

A few days later, I received a letter from Josh’s parents. Josh and his family were returning the following week! He had been talking about us for the past year and couldn’t wait to see us. The letter went on to say that he had been so inspired by his experience the previous summer, he had auditioned for and was cast in a musical at a junior theater in Maryland, something his parents never thought possible.

As the days of Josh and his parents return visited approached, I scrambled to find a way to welcome him back. I bought a card that said “We’ve Missed You. Welcome home!” and golden Mickey Ears with each of their names embroidered on the back. However, getting my cast involved was like pulling teeth. Most of them didn’t remember who Josh was, and those who did were reluctant to get involved.

On the first day of their return visit, we presented the family with their ears and the card for Josh. Tony, Josh’s father, cried when he proudly placed the ears on his head. “I’ve been coming here since 1976 and this is my first pair of ears!”

Over the next twelve days, Josh became not only a friend of my Cast, but a member of our family. Even the toughest Cast Members would laugh with him, and they taught him how to give high fives. Josh became a household name, not only to the Fantasyland Theatre, but to the resort as well. Leads from other areas would call me to say “I met Josh today. He gave me a high five!”

As the days of Josh’s trip grew shorter, my Cast eagerly asked what we could do for him for his last day. We were able to arrange another Meet and Greet with the Snow White cast, and I had a picture from a former Meet and Greet framed. When I brought in the frame mat for them to sign, my crew fought over who could sign first, who could sign where, and who had the most clever phrase.

On Josh’s last day, we had a surprise party waiting for him in the bleacher area of the Theatre. We presented him with the frame, a Dopey doll (his favorite dwarf), and Seven Dwarf bath toys (since he told me his favorite part of the show was when the Dwarves were told to wash up and Dopey pretended to eat the soap). As we all sat around eating cake, I looked around at my fellow Cast Members. They were all playing with Josh and laughing with each other. They had truly come together over this little boy. The whole time I wanted to bring a little magic to Josh, but somehow, he brought magic to us.

Its moments like these that remind me why I work here. This summer, a dozen or so cast members simply came to work and yet became the world to one little boy.

I usually wore a tie when I was FLT Lead, but this day I was training for a new role since FLT was closing. Hence the Fantasyland Attractions Costume. Also, bonus appearance by Brooke who came up from Small World to celebrate with us. 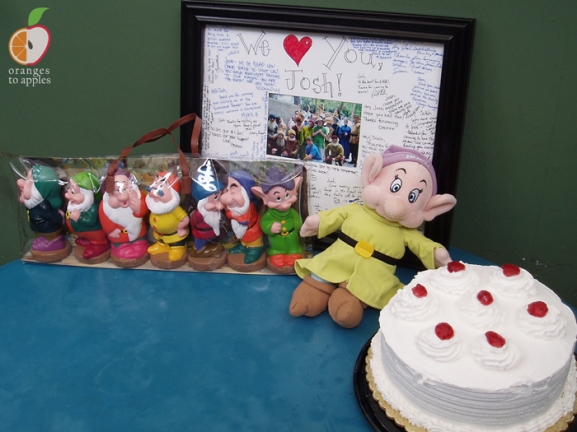 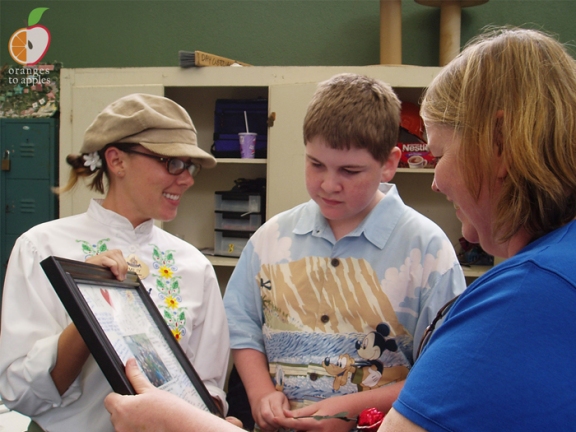 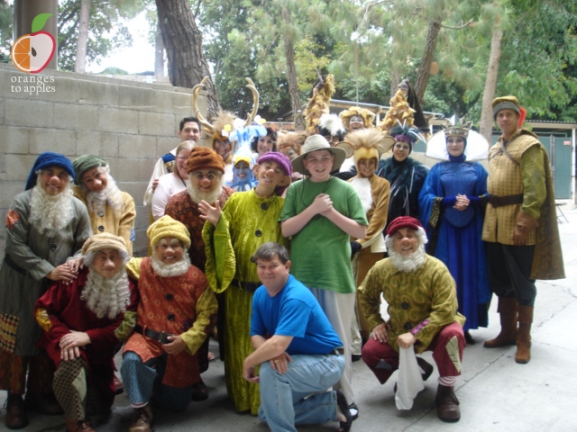 I hope I don’t get in trouble for posting this photo.