Eleven years ago today, I was in Hawaii for the first time. I swam with sea turtles and dolphins. I ate huli huli chicken and poi. I drank pina coladas and mai tais. I smelled plumeria flowers and watched some amazing sunsets. My dad was pulled up on stage at a luau. 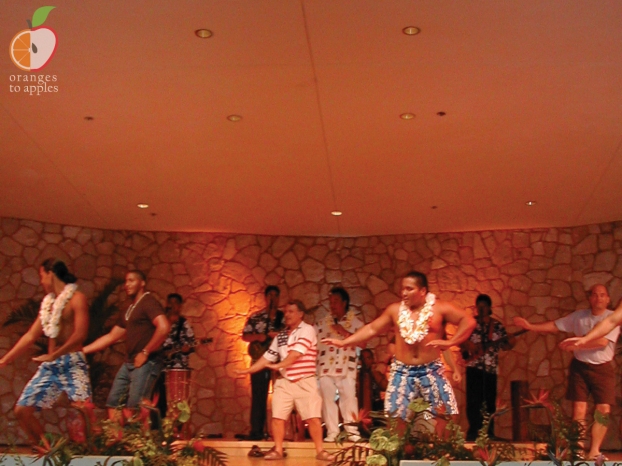 There’s my dad in his stars and stripes shirt doing the hula.

The day after I returned from Hawaii, I had knee surgery to repair a torn ACL and meniscus, a cracked patella, and a bruised femur.

Both of my knees had been weakened over years of abuse from dancing and soccer and snowboarding. What finally did me in was slipping on a costume piece during Flashback. I landed on my knee and needed to be carried off stage. Cynthia Harriss saw me backstage and ordered her assistant to get me ice and pizza and I was told to go to the emergency room. I was convinced it was just a bruise, and I would be going to work in the morning.

I did not go to work in the morning.

Eighteen months later, I had surgery. The reason for the long delay is an even longer story but the short version is my original doctor was sued for malpractice, canceled my surgery two days before, and my insurance gave me the runaround before approving me for a new doctor.

After the surgery and six months of post-op rehab, my new doctor recommended low impact sports like cycling or swimming to reduce strain to my knee. He told me I’d never dance again. And I would never be a runner.

And here we are, eleven years later.

My knee still bothers me from time to time. I feel like it’s in a constant state of swollen. It aches and locks when it’s below freezing outside.

Two weeks ago, I celebrated three years as a dance fitness instructor. And in January I ran my first 5k.

I worked at Disneyland for 7 years, and Peter Pan is my favorite book/movie/Disneyland attraction, so I decided my first running event would be the Neverland 5k. I even convinced my brother to do the run with me.

Considering I stopped a few times to take photos (the Disney runs have Characters peppered along the course), I think a 12-minute mile average is pretty great. In fact, I ran the entire first mile without stopping or walking – a feat I’ve never accomplished before in my life!

I feel a little foolish being so proud about this. I’ve been told numerous times that a 5k is the lowest/easiest/lamest of the running events. But you know what? This is something I was told I would never do.

I hurt my knee in 2002 on the Hyperion Theater stage in Disney’s California Adventure. I find it quite satisfying to cross my first finish line in the same Disney Park.

(But I still don’t consider myself a runner.)