In honor of Diagon Alley opening this week, I thought I’d finally get around to writing about the trip we took to Orlando in February. R had to go to Tampa for a meeting early in the week, so we both took off the back half of the week and I met him in Orlando. I have a lot I’d like to write about, but for now I’ll just stick to the day we went to Islands of Adventure (and more importantly – Wizarding World of Harry Potter).

We stayed on Disney property (because 1. we got a great deal and 2. it’s more fun) so I thought getting to Universal would be the biggest challenge of our trip. It wasn’t. (Turns out our biggest challenge was returning R’s rental car but that’s a story for Part 2). The staff at our hotel was amazing – not surprising for Disney – and signed us up for a shuttle. It was $20 round trip each, and the shuttle picked us up right at our hotel.

We were offered several shuttle times that picked up just about every hour. The girl at the front desk told us it would take 90 minutes, so we decided to take the 7am shuttle to ensure we were at the park by the 9am opening. The shuttle took 20 minutes so we were extremely early.

We took our time walking down City Walk. We saw a duck sitting at a bar, and we decided he probably had a rough night. 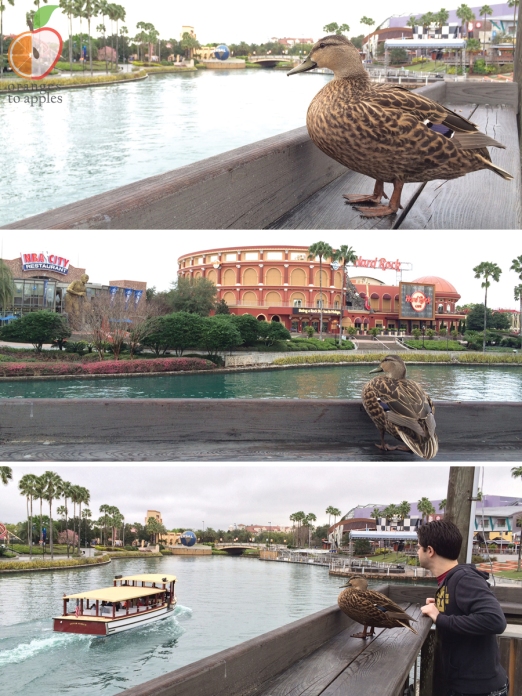 Hard to tell, but the duck is actually sitting at the bar.

We hung out with the duck for a while. It was relaxing watching the boats on the river. And also we were 90 minutes early and had nothing else to do. It rained the night before, so most of the benches were wet.

Around 8am, we were approached by a Universal employee who asked what we were doing. We explained we received poor information from our hotel, and the shuttle dropped us off too early. He asked if we had an early entry ticket. We did not. He told us not to tell that to any one else, and escorted us in to the park a full hour early. Completely unexpected and absolutely appreciated.

The only part of the park opened was WWoHP, which was fortunate for us because that’s where we headed first. I’m not going to lie, I did tear up a little the first time I saw Hogwarts through the trees. 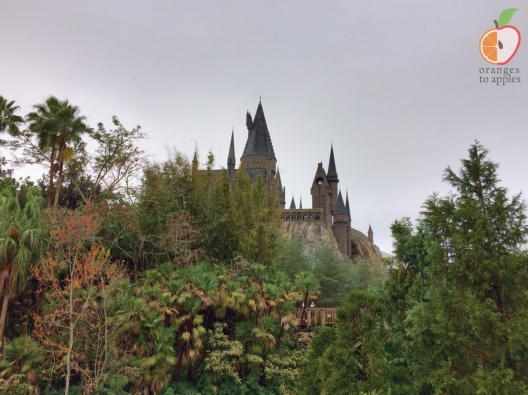 Who knew there were palm trees at Hogwarts?

The first ride we went on was Harry Potter and the Forbidden Journey. The wait was posted as 11 minutes, but there was no one else in line. We think the 11 minutes was the time it took to walk through the queue. 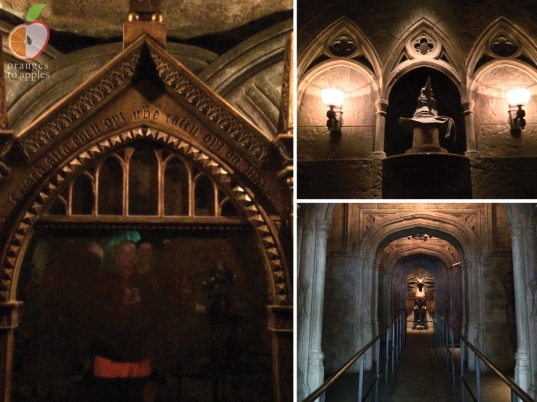 Speaking of the queue, it’s amazing. You walk through Hogwarts Castle, and it’s beautiful and perfect and you really feel like you’re in the movie. Because there was no one else in line, we went twice in a row. While the ride is technologically speaking one of the best rides I’ve ever seen, twice in a row is a bit much on an empty stomach.

From there we went on the Flight of the Hippogriff, which is basically Gadget’s Go Coaster. I’m glad we went on it, but once was enough and we did not go on it again.

We grabbed a quick snack (Two croissants for less than $2!) and then we went on the Dragon Challenge. This was themed to be like the Triwizard Tournament, and it was our favorite ride of the day. 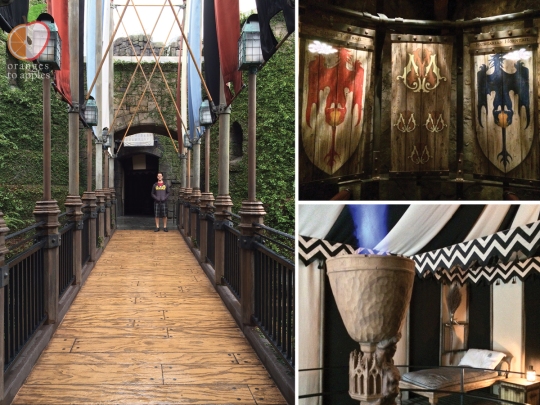 Again, there were no lines, and we rode in the front of both tracks – themed to be the Hungarian Horntail (blue dragon) and the Chinese Fireball (red dragon). Actually, when we rode on the Chinese Fireball, we were the only people on the entire train.

By the time the park opened, we’d already done almost everything in WWoHP. 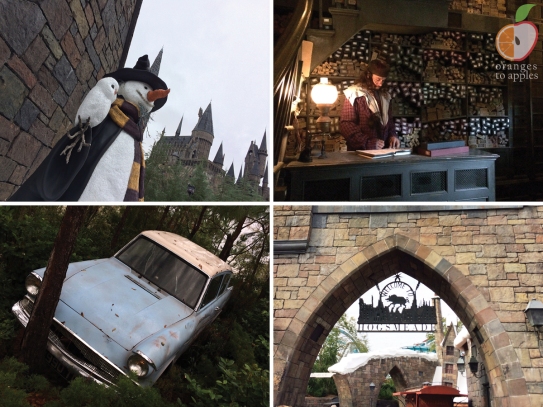 Ollivander’s Wand Shop didn’t open for early entry, so we went there when the park opened and were in the second group that went in for the 10-minute show. It was basically the scene from the movie where Harry gets his wand, but he picks a child from the audience. The kid Ollivander chose had a bad attitude (aka he was being a teenager). Ollivander scolded him and said “You’re lucky I’m in a good mood, so I’ll ask you again before I pick someone else.”  Later in the day, the line wrapped around the building, so I’m glad we got it out of the way when we did. The show was cute, but it is kindof boring if you’re not a child or traveling with a child.

After Ollivander’s, we bought a bottle of Pumpkin Juice and ventured out to the rest of the park. I did not like Pumpkin juice. It tasted like apple butter, but more liquidy and not very pumpkin-y. 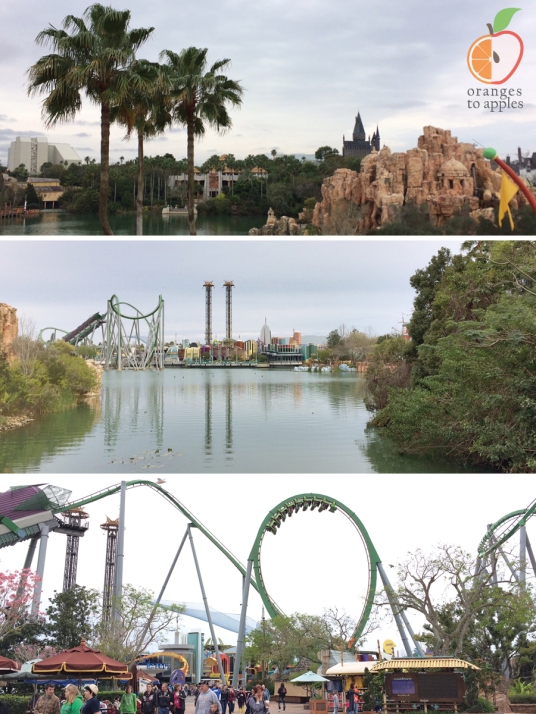 The rest of the park was fun, but not nearly as well themed as WWoHP. Actually, this comic sums it up perfectly.

The weather was overcast for most of the day, and temperatures were in the mid-60s. For two New Englanders escaping the Polar Vortex, it was a sweltering. For Floridians, this was probably too chilly. Also, it was mid-week in February. The park was mostly empty and we hardly waited in lines for any of the attractions – including the lines for the front row.

We decided to have lunch at Mythos, which has been rated as one of the top theme park restaurants. We were not disappointed. When the check came, we were shocked that it was less than $30 for the both of us (including tip). Are we just used to NYC prices? Or is Universal Orlando against price gouging their customers? Earlier we paid less than $2 for two croissants and even the Butterbeers were only $4. (Side note: we did not find food prices at Disney to be as reasonable, so it’s probably a Universal thing.)

After we went on every ride in the park (including all of the Dr Seuss rides and excluding the water ride), we went back to WWoHP. The lines were a bit longer, but no more than 10 minutes (again, including the front row of the Triwizard coasters). We rode the Dragon Challenge several times, and decided the Hungarian Horntail was the better of the two tracks.

In London I had my Butterbeer on the steps of 4 Privet Drive, and in Florida I enjoyed a butter beer at the Three Broomsticks. My little HP Geek heart exploded.

A few years ago, I went to the Harry Potter studios outside of London, so Butterbeer is not new for me. The studio tour does not offer frozen option, so I was excited to try it here in Florida. I prefer it served this way.

By 4pm, we did everything we wanted to do (in some cases multiple times), so we decided to leave the park early and head to Downtown Disney for dinner. I couldn’t have been happier with our day, and I’m a little nervous to go back. I’m not sure any other visit I’ll ever have will be as magical as this trip – unexpected early entry, no lines, front row for everything, great company. Pure magic. Including this: 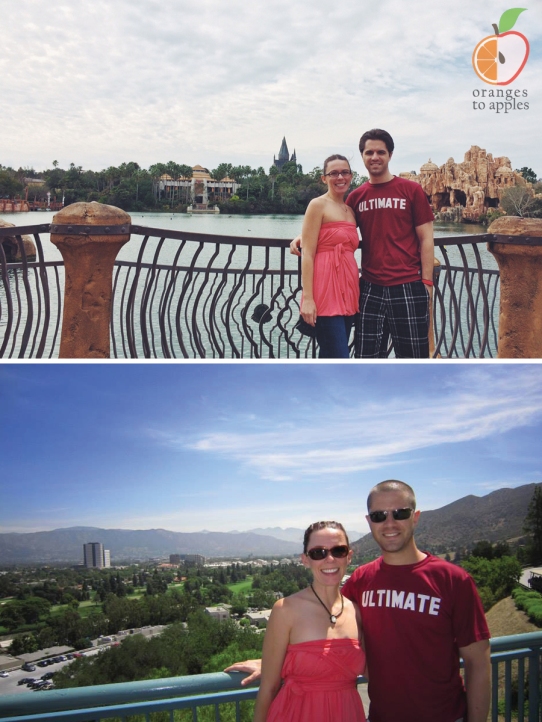